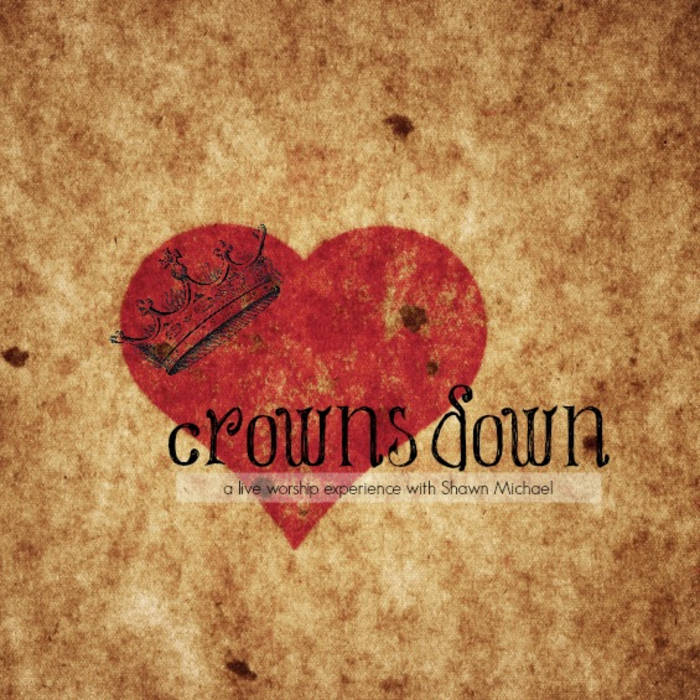 It all started last Christmas, December 2012… I was opening presents with my family…

I got to my last gift from my wife, Deanna… one that she had been making me wait to open all night long. I didn’t have a clue as to what it could be. When I opened it, it was simply chord charts printed out from ten worship songs that I have led over the years. She told me that she had copyright-licensed the songs for me to record them however I wanted.

I immediately teared up.

I had kind of set aside writing and recording worship music ten years prior, when I last released a recorded project. We started to have kids around that time and our family grew from one to five exponentially. I chose to make them my priority — and they still are — but this was exactly the push I needed to light the inspirational fire that I was needing to do another recording.

It wasn’t until early June that I started getting serious about the project. I knew it was risky, but I wanted to do a live recording. There’s lots of factors that can make a live atmosphere a catastrophe for a project like this, but I wanted to capture the energy and emotion of a live performance.

I started asking some long-time friends and musicians from my home-church, Destiny Foursquare, if they would be willing to rock with me on the project. Right away, I got several “yes” responses back, starting with Brent Parker and Ken Verheecke — both amazing recording artists and friends. And then from Bill Goodgion and Barry Edwards — who are both incredibly solid, and much respected musicians and friends that have played with me at worship and concert events many times over the years. I was so stoked!

Still, I wasn’t sure how I was going to pull this off.

After leading worship at my first district camp that summer, I had an idea… I asked my newfound friend and my junior high camp drummer, Aliyah Stevens, to be on the project. I had only played with her once before, but after that week, I knew that she was who I wanted. She’s the kind of team player that everyone wants to have in their band. I was blown away!

And then, shortly after I asked Aliyah, I also went for the big ask and approached Shane Toven, who has been our on-call Wondervu teen camp sound engineer for the past few years. The story goes that he was there for the first day of camp a few years ago, when the sound was set up by a new director and his team. The first night’s sound was reportedly horrible (I wasn’t there). He came out of nowhere to offer his help and from then on… Camp Wondervu has had the best sounding worship teams in the history of our district. No joke. He’s that good! He said, “Yes, I would be honored,” and I felt like the most blessed guy alive. He brought all of his gear and make the digital recording possible.

We set the date for Sunday night, July 28th at 6:30 PM, and started band practice with the Rapid City locals (all except Aliyah and Shane) early that month. We practiced once for about three hours each week for the first three weekends. During that time, I had asked another amazing percussionist, and a former youth group student of mine, Sam Roth, to fill in on drums for us. He was doing such an amazing job that I asked him if he’d be willing to play with us on the original songs for the live project. He too, said “yes”!

The last week, we all met together for extended evening practices, three nights in a row. It was a bit grueling, for sure, but also so much fun with such amazing people. I love them all. On Saturday night, we even had a big group dinner out at Barry’s. They all feel like family to Deanna and I.

All that said, that night was one of the best nights of my life. I’m so thankful to Deanna for making it possible and for so many friends who came out to support us and worship with us that night. I will never forget it.

After all the summer camps, I started doing some preliminary editing with Ken over at his home-studio in Piedmont. After two days, we decided to switch our approach. And then after a couple more days, we changed gears again. Summertime ran out on us and I planned to visit Ken again in September. When we got together that time, I purchased the Logic Pro X software and Ken trained me how to start mixing and EQing the project myself.

Long story short, I spent October and half of November learning how to mix the project. I literally went through the whole album seven times. Every time — except for the 2nd one, I believe — the project kept on getting better and better. The 2nd time, it got worse. Much worse. I don’t know what happened there.

Anyhow, as time passed, the sounds were getting more pronounced and the mix was getting better. I was learning how to use the software and I kept on growing throughout the whole process. It was long and there was many hours invested, but I’m thankful for the mixing boot camp the experience was for me. I’ve become a much better “sound engineer-wannabe” in the process.

I was about to send it off for publishing but then a few close friends made some comments that made me re-think my decision. I decided to make the decision to invest in a trip to Laramie, WY, and asked if Shane would be able to spare a couple days to “help a brother out”. Because he is the kind of guy that he is, he cheerfully agreed, and within hours the album came to a new clarity that I didn’t think was possible in the pre-mastering process. Within the week, the project was submitted for mastering and production. And now, I’m just waiting for the box to ship at the end of the month, and the final processes for digital distribution.

It took a year… well, more like ten years, to make this project a reality. I’m beyond grateful for the journey. And for all of you amazing people that have encouraged me in the process. I can’t wait for you to hear it!

Shawn Michael Shoup (pronounced “shop”) was born and raised in the heartlands of South Dakota. He is a known and established worship leader, communicator and digital storyteller in the region. He is a passionate, spirit-led worship leader and loves to travel around and share in worship experiences at camps, festivals, retreats and more. ... more

Bandcamp Daily  your guide to the world of Bandcamp

Interviews With Butcher Brown and Slauson Malone, plus LP of the week by SAULT.